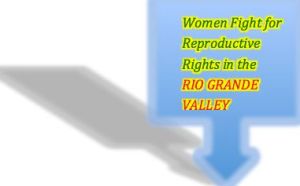 Brownsville, TX.    A report, Nuestra Voz, Nuestra Salud, Nuestro Texas: The Fight for Women’s Reproductive Health in the Rio Grande Valley, published in November 2013, reveals a women’s health crisis surrounding the reproductive health and rights of females of all ages in the Rio Grande Valley, but especially vulnerable are women in child-bearing age and beyond. In 2011, the State legislature slashed funding earmarked for family planning by two-thirds, leaving the already meager services for women in a dire condition.

The most vulnerable are reproductive age women that are within or below the poverty level, immigrant status that is undocumented as well as “resident” in some cases, with children, and a spouse that is unemployed or underemployed, or may be a single parent.

Undocumented immigrants are ineligible for insurance under the Affordable Care Act and do not qualify for “tax credits.”

Individuals who have the DACA status (Deferred Action for Childhood Arrivals, also known as the “Dreamers”) are excluded from accessing the Affordable Care Act insurance.

To qualify for Medicaid, the families’ annual income must be 25 percent below the federal poverty level (Example: just over $6,000 for a family of 5), therefore many women and/or their families DO NOT QUALIFY for these funds.

Women in South Texas (el valle) are twice as likely to be diagnosed with cervical cancer and die from the decease.

The report, Nuestra Voz, Nuestra Salud, Nuestro Texas: The Fight for Women’s Reproductive Health in the Rio Grande Valley is a result of an investigation in 2012-2013 by the Center for Reproductive Rights and the National Latina Institute for Reproductive Health to assess the impact of the 2011 budget reductions and new policies on women’s health care in the valley, specifically in a four-county region straddling the US/Mexico border including Cameron, Willacy, Hidalgo, and Starr counties.

For the purposes of this review two questions are foregrounded plus a CALL FOR ACTION:

188 women participated by answering specific, focused questions and providing feedback, individually and as a group. The women were selected because of their experiences and understanding of the issues on a first-hand basis. The interviews and group discussions were held in community centers, health centers, churches and private homes in cities and in rural areas as well as isolated communities known as colonias (unincorporated residential communities that often lack the basic infrastructure such as indoor plumbing, electricity, and paved roads). Ten of the 49 women that were individually interviewed were promotoras (a public health worker/educator that is closely tied to the community due to shared language, culture, and life experiences and serves as liaison between social and health services and the community). The majority of the women were either citizens or residents (55 percent), and 39 percent were emigrants from Mexico without documentation papers. The women, mostly between 20 and 40 years of age, lived in or around the cities where the meetings were held: Rio Grande City, San Juan, Mission, Edinburg, Alamo, Donna, Lasara, and Brownsville.

The women, whose household incomes were in the range or below the federally defined poverty levels, reported that the cost factor was the main barrier to accessing reproductive health care, from even the basic contraceptive counseling services and supplies to the urgently needed mammograms and ultrasound exams.  Even though 78 percent had health insurance, in most cases, the coverage was not enough since co-pays and other fees were beyond their reach financially.

Statewide, 40 percent of women who had access to family planning in 2010 do not have access to these services today due to the budget cuts.

PLANNED PARENTHOOD, the largest and long-serving provider of family planning services was the “target” behind the drastic cuts in family planning services. Legislators who disapproved of abortion services providers proposed (and subsequently passed) the “affiliate rule,” excluding Planned Parenthood clinics from receiving Women’s Health Program (WHP) funds, simply by refusing federal matching funds. Even though some Planned Parenthood (PP) clinics had one of its services to provide abortions, these are proportionately small in comparison to the other women’s health services that they provided. And, not all the PP centers provided abortion services. In the four counties highlighted in the report, 9 out of 10 funded family planning clinics have closed. The two WHP funded centers, Planned Parenthood, have since shuttered.

Planned Parenthood clinics were of great value to the women in South Texas. The newly organized distribution of funds is mainly earmarked for community health centers, restricting funding for Planned Parenthood. Historically, these community centers have reached only a fraction of the women that need health services, so a new strategy is required to radically change the system of women’s health services.

Women are simply denied basic reproductive services or access has been extremely restricted. The few clinics that are opened and available for the women are so few, and scheduling appointments for routine services require women to wait a much longer time than before the cuts. Transportation is an issue for many women, and public bus service is hardly available. Women have reported that there are no clinics in the area that provide mammogram exams or ultrasounds; private physicians and hospitals or clinics are too expensive for the women.

But, the impact of the reduction of funds specifically aimed to assist women, and the damage caused as a result of these cannot be measured in concrete terms. Each of the women featured in the report talks about how they have been personally affected, and their stories are tragic, heartening, and frustrating. They open our eyes to the real problems and how decisions at the State level can directly affect them, and other women.

The women featured in the report talk about the kinds of concerns that all women worry about. Some of these include the need to remove cervical cysts, pelvic pain, abnormal bleeding, lumps in the breasts or painful areas in the breasts; and the need for contraceptive supplies. Cervical cancer rates are double compared to other groups of women, another source of great concern for the women from South Texas.

Women who seek abortions must either travel by car or bus for six hours to the nearest abortion provider/clinic, or self- induce an abortion, which can be dangerous and life threatening. Unfortunately, economic circumstances force women to opt for the latter.

What specifically can be done to address the crisis?

1.  Immediately!  Provide adequate state and federal funding for women, especially ones that are in a desperate medical condition.

2. Provide necessary resources to women that live in rural communities, ensuring quality care, both preventive and on an emergency basis.

3. Revoke the “affiliate rule” so that funding from the federal government can be restored.

4. The State should participate in the expanded version of Medicaid, and allow immigrant women and their families to participate as well as allow their children to enroll in the Children’s Health Insurance Program (CHIP).

The Texas legislature took drastic measures to reduce the essential resources for women’s reproductive health. However, the kinds of action taken by the State government is reflective of a kind of “war” raging across our country, primarily by politicians and organizations that have embraced a conservative, right-wing agenda and use their abundant resources to attack the most vulnerable members of our society. The case of the South Texas women in the investigative report is a prime example of the consequences of the actions of a few powerful, influential, and self-centered individuals and groups. The only way by which we can insure that our country is a democracy and not a plutocracy is to raise our voices and take action so we can be heard and not allow others to make the decisions that solely belong to the women. 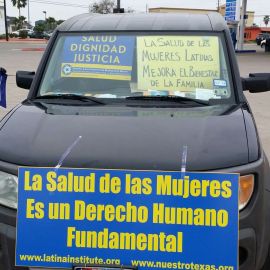 Posted by Irma Guadarrama on January 28, 2014 in Uncategorized